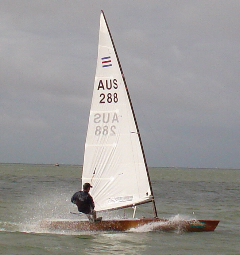 Below is a short report on the 2008 Australian Championships Brisbane that finished on Sunday the 6th of January.

The weather pattern was very unusual in that there was an intense low that affected the whole regatta.

Days 1 and 2 were blown out with too much wind. 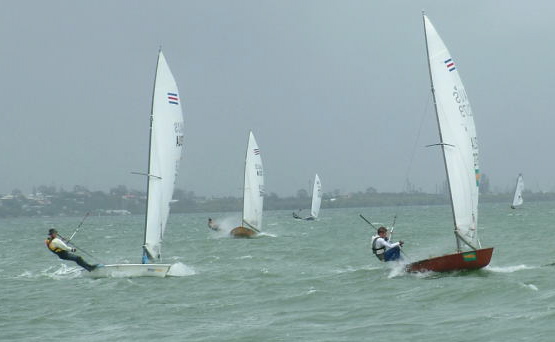 Tim dominated with places of 1,2,1,1. Marcus was not himself, he broke some gear capsised and got 3,28,3,2.  2 veterans from WA had good races on Day 3, Chris Sutherland (me) had 2,3,4,6 and John Cassidy with 3,4,5,7.  Jonno Neate broke his mast during a capsise (he was sailing Andrea's boat with his own rig).   Matt Mulder the ex national champion won race 2 and was 3rd in race 4 sailed well also.
Day 4 was 2 meduim wind races, Sandy Cavill from won race 1 on day 4, and Marcus won race 2 starting to show world championship form.
On the last day day 5, the wind was 8 - 10k, Marcus won from Chris Peile (in Sorens old boat), with Tim Hill 3rd which was good enough to win the regatta.
The last race was cancelled as large thunderstorm threatened the fleet.
Marco Versari sailed a very consistent regatta in Matt Hosie's boat to come 3rd overall. 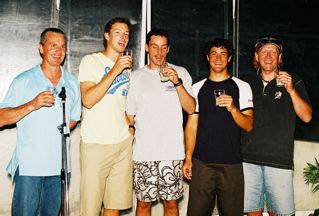 The regatta was sailed in Brisbane the water conditions are similar to Medemblik, and usually the climate is dry and moderate wind although for this regatta was warm wet and windy.  Brisbane is the venue for the 2010 worlds and is a excellent venue,  we will post further reports.