Most of the class members live in places where Contender fleets are strong and also close by.  Within North America, we have neither.  The class here is very small, but due to the efforts of Gil Woolley, Neil Smith, and a few other committed members, it is growing and gaining traction and exposure.  But wow, some of these guys drove for days to get here.  Let’s see, Gil probably drove 60 hours each way, Mike 21 hours, and the Canadians drove 24 hours.  Either they are desperate to get out of the cold Canadian winter, or as I prefer to think in my blind optimism, they are committed to the growth of the class in this continent.  And it is finally happening.  This is our second Florida midwinters, and for most of you eight boats is a very small fleet.  And it is. 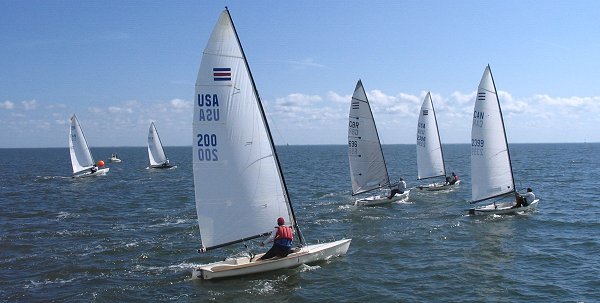 The saving grace on Day 1 was the warm weather (22 degrees) and decent breeze (12 knots). Before the wind diminished, the vigilant race committee managed to get five races in, and with one drop, Ethan Bixby, somewhat fresh from winning the 505 European championships, was leading. Roger Martin lay in second, Tony White (all the way from the UK) third, and Neil Smith was around there too. Day 2 started with lots of sun and about 8 knots, which died pretty fast. Two races were run, with Ethan scoring two bullets, Roger Martin and Tony swapping seconds and thirds, and Neil a solid fourth. More wind was in the forecast for the last day but it opened with thick fog so there was a slight delay, but three races were held in about 6 - 8 knots of breeze. And it was close, but Ethan Bixby is our 2009 Intergalactic Champion, edging out Roger Martin by a mere one point. Neil finished third, just ahead of Tony White.

We all had a great time, and the food, camaraderie and racing were great.  Especially the food - thanks to Trudy, Gail, Kay and Andrea.  Sunshine is really common here, so all is good.  Some are still waiting for the massive cold front breeze to descend on Tampa and really blow.  The locals are hoping for the strong pre-frontal warm southerly wind which suits our thin skin better!  But timing is everything so I am hoping that all can come sail again next year to see what we get.  To a person we all learned a few more bits of knowledge and skill, and got in some competitive racing together.  Arthur and I wanted to get some practice time this fall, but life got away from us and we have both been too busy.  Arthur forgot the date (I won’t let that happen again!) and did a Star regatta, but was most helpful in lending his boat to Gil whose boat suffered a bit of car-inflicted damage on the trip from California.

Looking forward, we are thinking of 2009 regattas that we could attend and pull together a fleet and again learn some more about these great boats and get some exposure to the right type of sailors.  We will keep trying to raise the bar on our personal abilities and continue to enjoy this fine boat and share it.

We have some plans to propose hosting another Worlds in our fine continent in a few years, and are looking at some Florida locations in the fall or spring.  These are our best seasons in regards to sailing, because they offer the most promising wind patterns (think nearby hurricanes in the fall) and are probably the easiest times for competitors to minimize the impact of a distant Worlds on their regional sailing.  October and March are particularly good months, so send me any feedback you might have on how that would work for you.

Report by Ethan Bixby, with race report by Stephanie Mah