Meeting started at 1845 hrs and ended at 2046 hrs
The meeting was opened by chairman Søren Andreasen.
Apologies from: President Jan von der Bank and Treasurer Tim Holden
The draft minutes of the 2007 AGM were approved as posted.

Søren Andreasen reported that the Contender world is going well.  There is a shortage of good used boats. With a smile, he implored all sailors attending to sell their present boats and buy new ones. He said that we need to have the various nations pay their dues on time. Member discussion followed regarding the identity of the nations which have not paid and some proposals for penalizing helmsmen at the Worlds who come from non-paying nations.

Tim Holden handed out many copies of the treasurer's report: 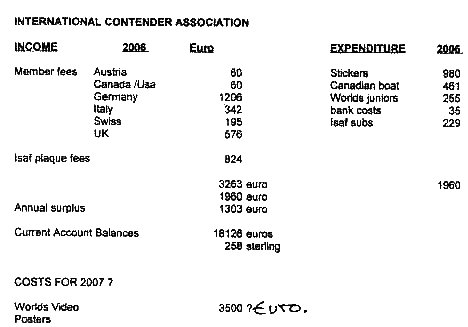 Tim described some nations have supported boat shows within their country without obtaining agreement from the ICA and then have tried to subtract the amounts from the dues to be paid to the ICA.  The officers want any projects that would involve ICA funds to be proposed and approved in advance of the commitment of expenditure. Spending the money first and asking permission later is not good management.

Alan Mollatt reported that the ICA had approved sending Finnish sailor Martin Söderström as our representative to the ISAF meeting in May at Helsinki (where Martin lives). We have received positive feedback from ISAF representatives and Martin also thought it was well worthwhile.

Minutes of the 2006 AGM at Fremantle, Australia were posted prior to this meeting. The vote was taken to approve the minutes.

2395 boats have been issued plaques representing new boats since the inception of the Contender class in 1969. (Through the end of 2006)